Dr. Werner Beckmann is the third Sauerlander to receive the Rottendorf Prize after Dr. Siegfried Kessemeier (1969) and Peter Bürger (2016). In his laudatory speech, Elmar Reuter, Chairman of the Sauerländer Heimatbund. outlined and honored the life and work of the 2020 Rottendorf Prize winner.

However, Beckmann was born in 1951 in Bochum-Riemke. He was able to speak Platt with his mother, who had to bring him and his sister up alone as they had lost their father at an early age, and so his fondness for this language developed in his youth. In 1971 he became a member of the Association for Low German Language Research. Beckmann left the evening high school with the Abitur in 1981 and studied Indo-Germanic linguistics, Latin, theology and ancient German studies at the University of Bochum. The Magister Artium in 1989 was followed by a doctorate in 1997.

Meanwhile, the Low German language has never left him. His involvement in various Low German projects led our prize-winner to Olpe in the Sauerland in the summer of 1999. There, by profession and in cooperation with many voluntary organizations, he is involved in the project “Dialects in the Sauerland”, which the Sauerländer Heimatbund had taken into its sponsorship, supported by the Landschaftsverband Westfalen-Lippe, the Cultural Foundation of the Westphalian Provincial Insurances as well as the two districts of Hochsauerland and Olpe.

This project “Dialects in the Sauerland” has been continued since January 1, 2002 by the “Dialect Archive Sauerland”, which has its headquarters in the historical building monument Stertschultenhof Cobbenrode in the community of Eslohe. Due to its convenient location on the Bundesstraße 55, the property, which is in splendid condition, is an ideal contact point for friends of the Low German language.

The archive built up here by Dr. Beckmann preserves and works on the meanwhile available interviews with more than 267 dialect speakers from 129 different places of origin of the Sauerland. In addition, there are further publications and dictionaries which document the special position of Low German in this region.

Dr. Beckmann has done extraordinary things for dialect research in the Sauerland. He has done all this in his reserved and modest way, never shouting or demanding, never harassing his environment with his findings. These are his attitudes that have enabled him to gain access to the Platt speakers in Sauerland. And thus also the success of the Sauerland Dialect Archive, which he realized – within the larger framework of Westphalian language research. 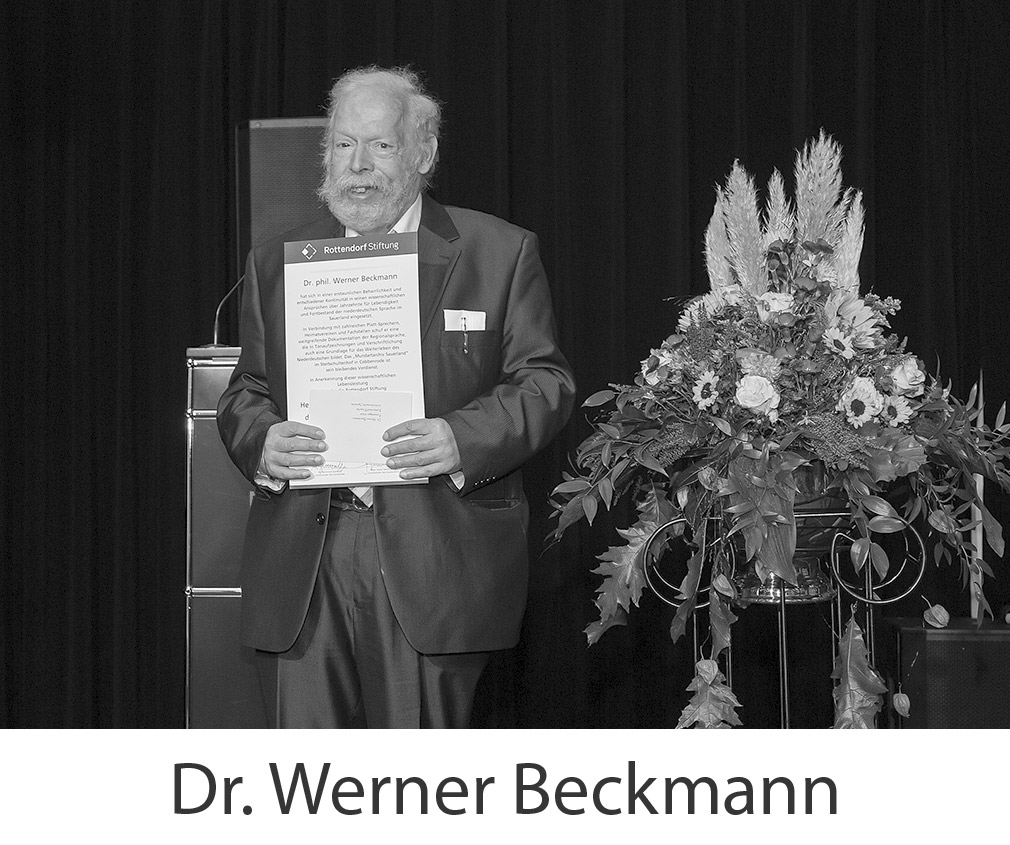